From deltaE
Jump to: navigation, search

The Kodak Gray Scale is the most commonly used gray scale test target. Its technical layout and specifications has been the same for the past few decades, although its graphical layout has been changed in various versions. The company Tiffen is now producing the Gray Scale under their own name, the Tiffen Gray Scale. Although the retail price of this target is relatively low, the target is largely being replaced by targets that also contain color patches, and designed for digital camera's. This target is often used together with the Kodak Color Control Patches target, in order to assess the color reproduction as well.

Kodak describes the target as a quality-control device that helps with the following items.

In the bottom half of the target, there are 20 patches that increase in density with steps of 0.1 density increments between 0.0 (white) and 1.90 (practical printing black). The patches are numbered from 0 to 19, where some numbers are substituted by characters: 0=A, 7=M, 16=B. 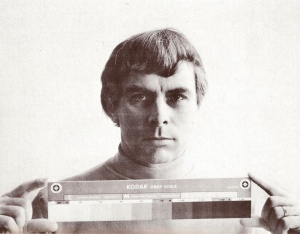 The following reference table contains the approximate values of all the patches of the Gray Scale. It is very likely that the actual values of your target differ from these values. The a* and b* coordinates are taken as 0, which is obviously the ideal case for a gray scale. The difference between the L*a*b values of your target and these values may be measured in just ΔL, or ΔE since the target is indeed designed to be neutrally toned.

All the values are in CIE-Lab, with a D50 daylight illuminant and 2 degree observer.